At Netkids.gr, you can send an e-card for any occasion. They even have personalized Feast Day cards that include the first name of the recipient in Greek. How neat is that?! Send one to a friend today. 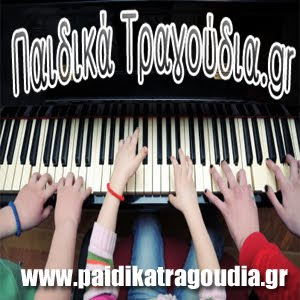 I don't know about you, but my kids love Greek music. Not only do they enjoy it, but it also boosts their vocabulary! I am amazed at what they learn, and when I ask them about it, they will tell me in many cases it was from a song they heard.

Join the fun, by listening to Greek children's music and videos at ΠαιδικάΤραγούδια.gr at
http://www.paidikatragoudia.gr/.

Posted by Presbytera Georgia at 9:00 AM No comments: 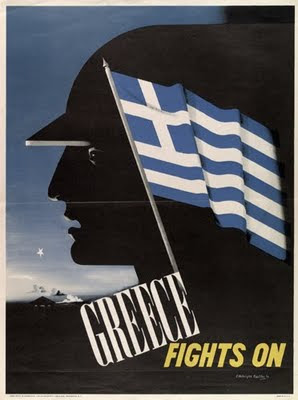 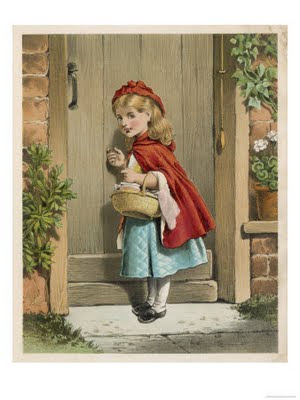 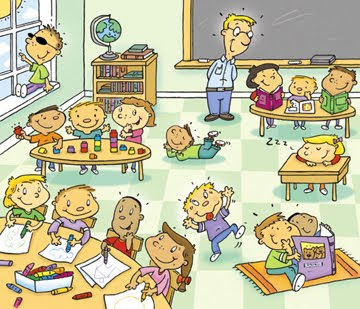 Label things around your classroom or home from Grafoulis.gr
http://www.grafoulis.gr/wp/IROES/PINAKIDES%20.pdf

Posted by Presbytera Georgia at 7:20 AM No comments: 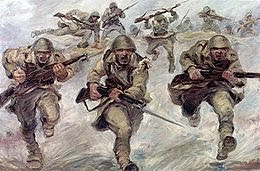 Having fought at the war front, painter and draughtsman Alexandros Alexandrakis (1913-1968) found time to document the harsh life of soldiers up on the Pindos mountains.

Posted by Presbytera Georgia at 9:05 AM No comments: 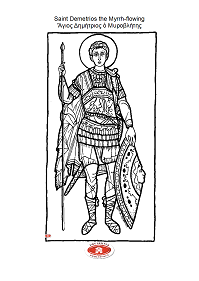 Life of St. Demetrios in English from
the Greek Orthodox Archdiocese of America http://www.goarch.org/special/demetrios/index_html


Troparion (Tone 3)
O victorious Demetrios, thou wast a protection for the world and an invincible soldier of Christ. Thou didst inspire Nestor to humble Lyaios. Intercede with Christ our God to save us

The coloring page to the right of the post was created by Egle-Ekaterine Potamitis. More of her work can be seen at the Potamitis Publishing link under learning resources.
Posted by Presbytera Georgia at 8:56 AM No comments:

Posted by Presbytera Georgia at 11:24 PM No comments: 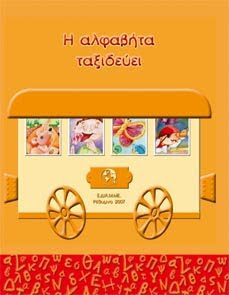 I am always on the lookout for fun and colorful materials I can use in my classroom, and with my kids at home. Last year at the Metropolis teacher's meeting each school was given a folder with a little train carrying the Greek alphabet that included a matching game. My kids loved it! My students loved it! I hope you like it too.


I would suggest these be printed out on card stock and laminated if possible.

Posted by Presbytera Georgia at 9:08 AM No comments: 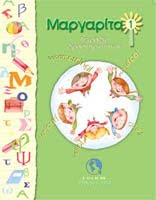 The main reason this blog was created was to disseminate information about Greek education. Greek education in America has changed drastically since I was in Greek school. The demographics are different, lifestyles are different, priorities are different. There was no getting out of Greek school when I was younger, we never even dared to ask our parents to skip school, because we knew it was so important to them (1st generation) for us to learn the language of their homeland.. they needed that connection. They sacrificed and worked at factories and restaurants so we could have the best education, including Greek School, and in return they expected us to study. They expected us to be good Orthodox Christians and honorable "Ellinopoula". But as I stated before, times have changed and many things take priority over Greek school... baseball, birthday parties, life. Every family has its priorities, and sometimes, Greek education does not fit in... and there is nothing wrong with that, it just comes with the territory of being Greeks in the diaspora.

Thirty years ago, Greek textbooks used in America were the same ones used by Greek children in Greece. As a matter of fact, when I went to Greece at 8 years old, I went to school with my cousin and guess what... we were on the same lesson . These books worked then because mom and dad in most cases spoke Greek and if not, Γιαγιά and Παππού did and they would help with homework. But now the books used by children in Greece do not work for us. The Greek government knows this and spends a lot of money developing books to teach kids in the diaspora Greek (your talking about over 40 countries speaking that many different languages with kids learning Greek as a second language).

The Greek Orthodox Archdiocese of America has also started producing a series of leveled books (not grades) called Τα Ελληνικά Μου. These books have been created for the Greek American student, using stickers, music, a dialogue CD and a supplementary book that explains everything in English for the non-Greek parent who does homework with the child. Anyway, I can go on and on.

Please take a look at what the Greek Ministry of Education and Religious Affairs and the Univeristy of Crete (Rhethymnon) in has produced for us...
http://ediamme.edc.uoc.gr/diaspora/index.php?yliko
Posted by Presbytera Georgia at 8:10 PM No comments:

Prasini Priza is a great website from Cyprus with many resources, games and lesson ideas. Click on the links below to print out the Greek alphabet (upper and lower cases), cut out and have fun playing a Greek alphabet matching game.

Victory, Freedom... Panagia with him 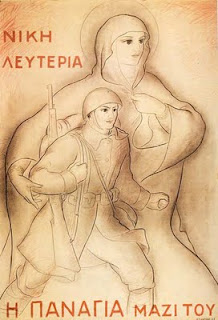 Our Greek School presents numerous programs throughout the year... Christmas, Three Hierarchs, Greek Independence Day, Graduation, and the OXI Day Commemoration.
"The Anniversary of NO", that we so endearingly call OXI (ochi) Day commemorates Greek Prime Minister Ioannis Metaxas' rejection of the ultimatum made by Italian dictator Mussolini on October 28, 1940. Who would have thought that a poor, small country like Greece would have been so brave in their simple response of "OXI" No!. No, Greece would not allow Axis forces to enter Greek territory and occupy strategic locations. Yes, they would follow their simple answer with bravery of heart and spirit and mark the beginning of Greece's participation in World War II. Since 1942, October 28th has been celebrated in Greek communities around the world with programs and parades.

In presenting this history lesson to my students, I like to include images of the time period. They are always so interested. And although many include soldiers and weapons, the ones that grab their attention the most are those that include the image of the Panagia. They inherently know that Panagia is in these images because she protects and prays for soldiers, she protects and prays for everyone. Their responses to these images are so genuine, and so right on point that they teach me a lesson or two in the end... like one of my students said yesterday, Panagia is always hugging us, just like she hugs the soldier in the poster and how she hugs "Christouli" in church.

Join in the celebration of OXI day by coloring your own Greek flag to display at home:

Posted by Presbytera Georgia at 9:34 AM No comments:

I really do! It is such a blessing to be able to instill a love of Greece, its language and culture in these beautiful children.

This blog is my humble offering of activities that I do in class to teach beginning modern Greek, Greek history and culture.
Posted by Presbytera Georgia at 2:29 PM No comments: 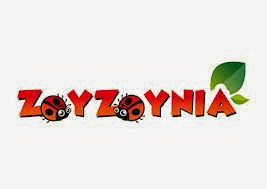 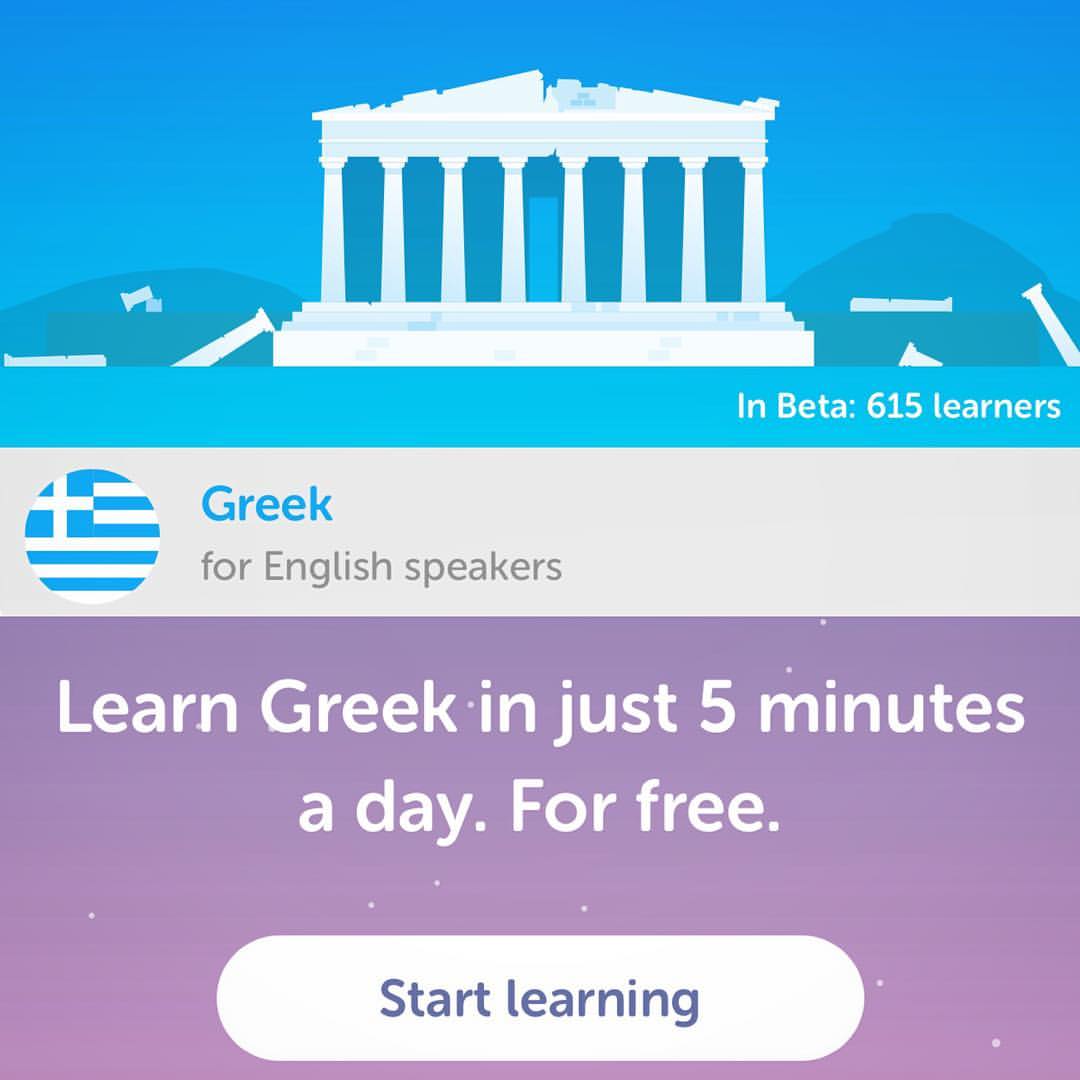 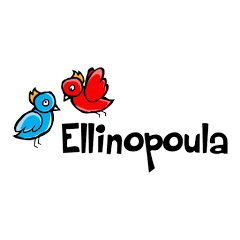 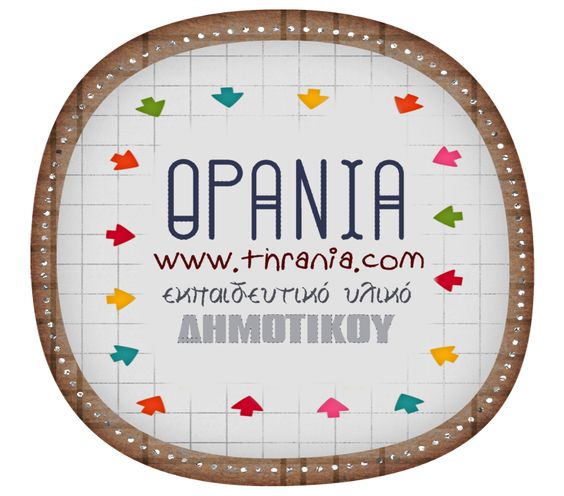